A Dover Heights oceanfront home owned by Wallaby legend John Bosler has sold for more than $6 million even before it officially hit the market.

Zac Rabin of JT Allen Real Estate was at the cliff top home at 10 Lola Rd with the drone team, and uploaded a casual shot of the property to Instagram, and immediately got an offer.

“I bought it for my client in about 20 seconds,” says prominent buyer’s agent Simon Cohen.

“Everyone’s had their eye on that property — it’s the last undeveloped site in the street.”

It’s easy to see why agents have been circling. 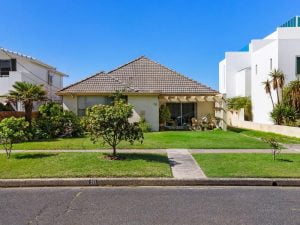 The house at 10 Lola Rd, Dover Heights, is right next door to a striking architectural home owned by PR man Max Markson.

He’d gone to Sydney Boys High School, graduating in 1950. It’s thought Bosler was one of the top five players in the history of school rugby.

Cohen declined to reveal the identity of the purchaser, saying only it was a local family who are going to build their dream home on the site.

He says he’s been incredibly busy during the crisis as house hunters search for good opportunities.

To view the full article https://www.realestate.com.au/news/wallaby-legend-john-boslers-dover-heights-oceanfront-home-sells-for-6m-in-lightning-fast-deal/?rsf=syn:news:nca:dt:article