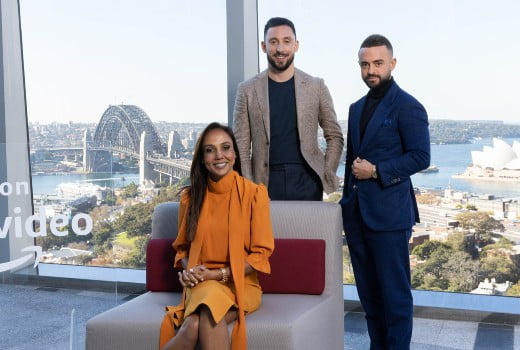 I was hooked on Luxe Listings Sydney from the opening line of “Oh My God, Is This Place For Real?”

Long a fan of Million Dollar Listing New York, I’d always wondered when someone would cotton on to the obvious appeal of showcasing some of Sydney’s amazing harbourside homes with iconic views to the world.

And the house that prompted buyer’s agent Simon Cohen’s exclamation — the Point Piper waterfront home of lawyer Sarah Cooke that sold for about $40m in April — is one those OMG-mouth-watering residences.

The show is fast, slick and sexy … a bit like Sydney itself. Lots of aerial imagery showing off the Bridge, Opera House and the city skyline. And ritzy cruisers on our beautiful harbour.

This first episode introduces the main stars and, being agents, it’s an opportunity for a boast: Rubinstein selling “billions of dollars worth of real estate”; Cohen “Obviously Australia’s best buyer’s agent”; and Lewis’s “so many awards”.

I mean, these guys have to face some big issues — like how to juggle teeth-whitening appointments. “My teeth could be a bit whiter … those three days were hard not having coffee!” says Cohen.

And the cliches are flowing: “I eat risk for breakfast” (Rubinstein).

But they have to set the scene, right? Once we get beyond this, I’m expecting the focus to switch to more about the houses than the agents themselves.

Already in the first episode, viewers are getting practical advice — explanation of real estate jargon and valuable takeaways via the banter between the sales agents with buyers agent Cohen as they tour the properties.

Like the visit to The Art House in Vaucluse with its $7.3m price guide: Lewis: “It’s amazing — here is the kitchen!”

My partner and I, currently renovating, got a few tips during the inspection of a $10m Dover Heights house. Black taps; the censor-timed lights on the stairs; a heated marble slab for the bathroom?

As Rubinstein points out the highlights – “Postcard Sydney”, Cohen addresses some of the issues — “we’re literally on the main road” — and even tells us when to walk away: “If the deal isn’t at a level that I think is right, then we will quite simply move on.”

And Rubinstein’s advice for his vendor — which should be embraced by every home-seller: “Get the pool cleaned.”

Buyers agent Simon Cohen tells us “when to walk away”.

Then there’s the intense rivalry, which happens in Million Dollar Listing and real life, too. It gets nasty between Rubinstein and Lewis. Looks like this will be a theme throughout the show.

As Rubinstein’s brother, Jarryd, says as the pair jog shirtless along the eastern beaches coastline (more amazing Sydney scenes!): “The calibre of the industry is dog-shit.”

Many viewers will probably agree.

That’s Luxe Listings, but if you want to see another eastern suburbs real estate agent doing something completely different, turn to Channel 10 on Sunday.

You’ll get to see 1st City Real Estate Director Cara Atchison as one of the stars of Survivor Australia – Brain vs Brawn.